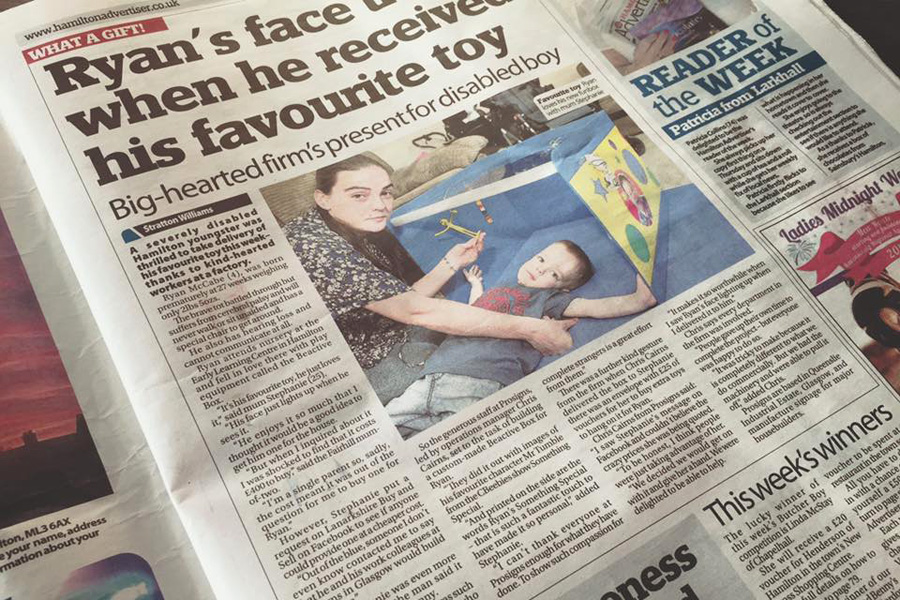 Our team made an extra special effort to make a big-hearted gesture for brave Hamilton youngster Ryan. The team at Prosigns were delighted to make a special delivery to young Ryan in Hamilton.

Ryan McCabe, was born prematurely at 27 weeks weighing only 2lbs 5ozs. The brave tot battled through but suffers from cerebral palsy and will never walk or sit unaided and has a special chair to get around. He also has hearing loss and cannot communicate at all.

Ryan attends nursery at the Early Learning Centre in Hamilton and fell in love there with play equipment called the Beactive Box.

His mum said, “It’s his favourite toy, he just loves it, his face just lights up when he sees it.”

Ryan enjoys the Beactive Box so much that his mum thought it would be a good idea to get him one for the house. But when she inquired about it she was shocked to find that it costs £400 to buy.

Stephanie put a request on Lanarkshire Buy and Sell on Facebook to see if anyone could provide one at a cheaper cost.

That’s where our Operations Manager Chris Cairns contacted Stephanie to say that he and his work colleagues at Prosigns in Glasgow would build one for Ryan.

So the team at Prosigns, led by operations manager Chris Cairns, set to the task of building a custom-made Beactive Box for Ryan. We even did it out with images of his favourite character Mr Tumble from the CBeebies show Something Special. Printed on the side are the words Ryan’s Something Special – to make it personal for Ryan.

Chris saw Stephanie’s message on Facebook and couldn’t believe the crazy prices she was being quoted. That’s when we decided we would get on with it and give her a hand. We were delighted to be able to help.

It made it worthwhile when we saw Ryan’s face lighting up when we delivered it to him.

The staff at Prosigns gave up their own time to complete the project – but everyone was happy to do so. It was tricky to make because it is completely different to what we do commercially. But we had the machinery and were able to pull it off.